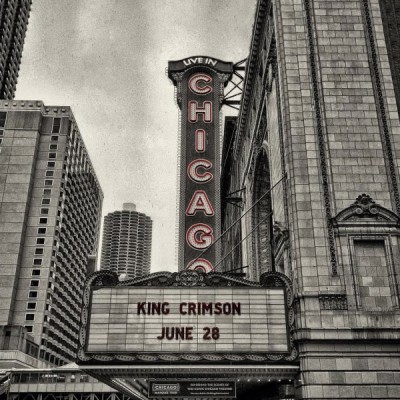 You can now pre-order King Crimson Live In Chicago, June 28th, 2017 via Inner Knot (US) and Burning Shed (UK & Europe). The 2-CD set captures a show which both Robert Fripp and Tony Levin hold in high esteem.

“If we are looking for a KC live (show); Chicago was exceptional” – Robert Fripp

“One of our best” – Tony Levin

The tracklist presents a diverse range of classic Crimson repertoire and also includes many tracks that appear in concert for the very first time.

King Crimson evolves, changes, morphs as relentlessly as the Soundscapes which open each concert. Since the 2016 tour of Europe, the band has become a double quartet line-up with Bill Rieflin’s return from sabbatical as keyboard player & Jeremy Stacey’s confirmation as a permanent member/third drummer. This allows for the inclusion of an ever more complex & compelling array of material, far more than can be contained in a single concert. With options for up to three keyboard players in the current line-up – Fripp & Stacey both have setups alongside their respective guitar/drum rigs - the majority of Lizard is performed live for the first time ever, likewise Fallen Angel from Red is making its first ever concert appearance/live recording, Cirkus envelops the listener in sound, the beautiful title track from Islands closes the first set, while staples from the 1980s line-up Indiscipline and Neurotica appear in very different arrangements. New piece, The Errors makes its recorded debut & current audience favourite Heroes appears in the encores at the end of Disc Two. Add to this list of concert newcomers & returnees, live staples of the recent tours such as Starless, Easy Money, a recording of Level Five described as the “best ever single performance” of the piece by King Crimson biographer Sid Smith & a storming ending provided by the evergreen 21st Century Schizoid Man & it’s easy to see why the band was so pleased with this gig & the audience went home happy.

King Crimson continues to re-invent & re-imagine both itself & its music; the kind of thing that once would have been called a “progressive” approach. It’s an approach that has benefited band members and listeners alike from January 1969 to the present – September 2017. The band is on tour in the USA in October & November 2017, with a European tour planned for 2018.

King Crimson: Live in Vienna, 2016 – originally scheduled for release this autumn will be released outside of Japan in early 2018, while DGM Japan will issue Live in Chicago early in 2018.

Best wishes to the Guv'nor

Starting with Saratoga we are uploading photos from various Royal Package gatherings from the last tour.