There's been a few sightings and references to King Crimson out on the interwebs of late. Here's a quick round-up of just a few.

The readers of Classic Rock magazine have voted King Crimson the 49th out of 50 best bands in the world... 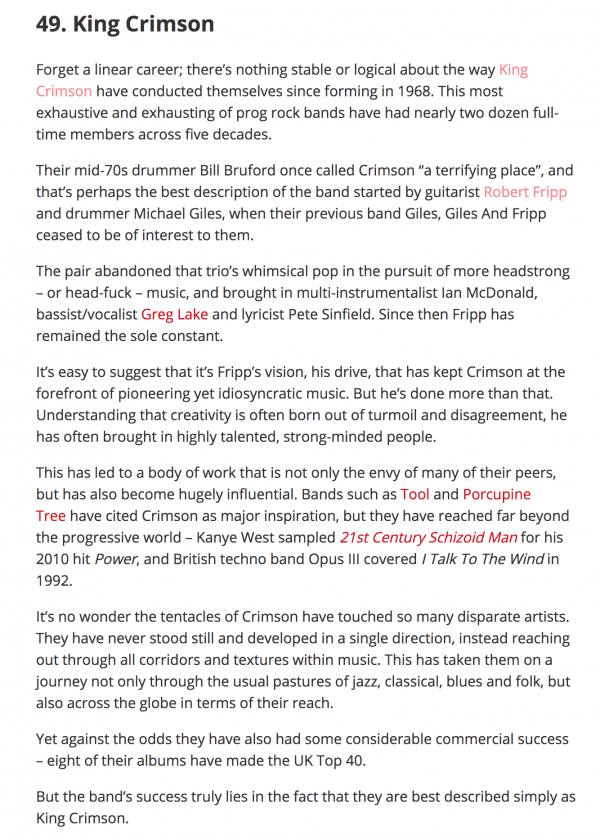 Gavin Harrison is no stranger to plaudits and polls. According to MusicRadar's recent article on the Seven best prog drummers Gavin comes in at No.3. Check out the full list here.  Gavin is currently out on tour in the US with The Pineapple Thief...

What's this? KC all the Rage? Apparently, a portion of KC's Sleepless video has been used as an intro for many years in Australian television. Antipodean KC fan Brian Polli writes: "For those unfamiliar, this clip is one of the intros used for Australian tv music video show Rage which has run overnight on a local station on weekends since 1987. It's funny to think that a generation of Aussies has been hearing the opening section of Sleepless for so long without actually making the connection with the band who performed it."

Norwegian band, Motorpsycho have long acknowledged their liking of Crimson - but here it is about 10 minutes into a documentary on the group...

MOTORPSYCHO Into The Maelstrom documentary (2019) from Bernie's Basement on Vimeo.