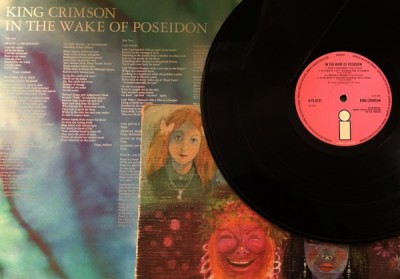 50 years ago today, King Crimson's second album, In The Wake Of Poseidon was released. Recorded in the aftermath of King Crimson’s implosion during their US tour in 1969, In The Wake Of Poseidon is the sound of an idea that simply refused to quit in the teeth of extreme adversity and apparently insurmountable odds. Understandably, the shock departure of half of the group had dented the confidence that had characterised Crimson’s demeanour during much of the previous 12 months. Yet in a remarkable display of personal and artistic determination, Poseidon meets the challenge of retaining and developing the fierce originality of ideas that helped fuel Crimson’s debut album.

Whilst Court had been a truly collective endeavour, it was undeniably moulded to a large degree around Ian McDonald’s writing and musicality. With Fripp now in sole command of Crimson’s musical direction, there’s a move into harder-edged, less rock-orientated territories that would be expanded upon further in later Crimson records. Despite a superficial resemblance to Court, caused largely by a decision to sequence the tracks in a way that mirrors the dynamics of side one of Crimson’s debut, Poseidon deserves to be judged on its own merits and not merely as an adjunct of its more famous predecessor.

Without a working band, Fripp’s asked Greg Lake, then biding his time until the newly formed ELP could start work, to stay on as guest vocalist whilst also recruiting drummer Michael Giles (along with his bass-playing brother, Peter) to return as session musicians. This was a solution that was practical as it was pragmatic. Having lived and worked together as Giles, Giles & Fripp during most of 1968, the core team responsible for laying down the tracks for the album had a proven track record of working quickly and efficiently. 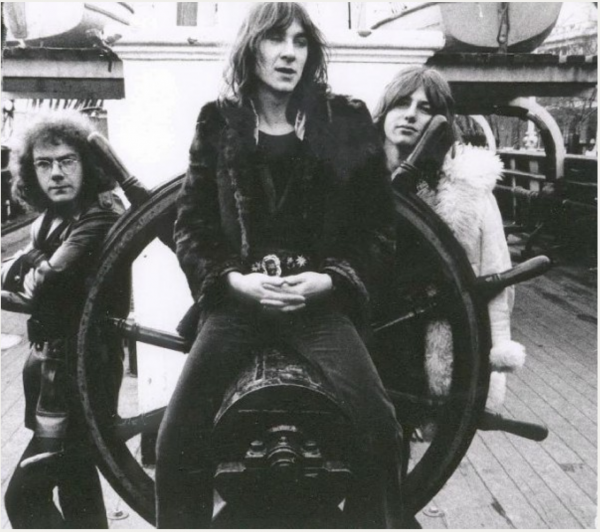 The pressure to maintain the commercial momentum of ITCOTCK produced a surprise single release. Cat Food (backed with Groon) was issued in March 1970 was about as far removed from the debut album as it was possible to get. The anarchic mood of the song occasioned by Keith Tippett’s freewheeling piano and Greg’s mid-song laughter (caused by Fripp dropping his trousers whilst Lake was singing) made this one of the most unlikely single releases of the year.

Despite these factors, not to mention Peter Sinfield’s satirical lyrics, Crimson’s profile at the time was such that the band was asked to lip-sync a performance of the song for the BBC’s prime time TV show, Top of the Pops. Perhaps unsurprisingly it failed to catch the ear of mainstream pop-pickers. Nevertheless, it signaled to critics and fans that Crimson was a going concern, and just as importantly, their ability to turn heads remained undiminished.

The haunting melody of Peace - A Theme (whose music dates back to 1968) opening and closing the album, provides a delicate and simple frame into which all kinds of stunning musicianship, dramatic themes, and turbulent motifs, jostle and compete for attention. Pictures of a City is brimming with numerous guitar overdubs, a tour de force of densely- wrought picking. Here Fripp gathers the implications of Schizoid Man’s fast running lines, and constructs them into hurtling force in with his trademark dexterity and love of bone-crunching power chords is brilliantly harnessed. The heavyweight nature of Pictures is enhanced still further by guest sax player Mel Collins’ additional firepower. At the time of recording, Mel was still a member of Cirkus - a band which had shared the bill with Crimson and Keith Tippett’s group as part of the Marquee’s New Directions series of gigs the previous year. His work on this track, and in particular the sublime flute on Cadence and Cascade, ensured his recruitment to a new incarnation of Crimson.

One of the last songs to be completed in the sessions, Cadence and Cadence, like Pictures Of A City, dated from 1969. Substantially revised in the Poseidon sessions, it quickly becomes one of Fripp and Sinfield’s most memorable collaborations. With Lake now off to ELP, he was unavailable for the final recording and his place on this track was taken by Fripp’s old friend, Gordon Haskell although the 40th-anniversary edition included a recently discovered guide vocal from Lake. The track would later be performed briefly by the Islands-era band and was revisited in the studio in the early 90s when Fripp asked Adrian Belew to record a vocal for the Frame By Frame boxed set.

Echoing both the sombre aspect of Epitaph and the hymnal qualities of Court, In The Wake of Poseidon is nevertheless an outstanding track in its own right. Its magnificent mellotron-driven chorus, inspired acoustic guitar interventions, astonishing drumming throughout, and the fragile beauty of Libra’s Theme contained within, is one of Fripp’s most heartfelt melodies every bit as equal to the yearning romanticism found in Peacock’s Tale (Lizard), the title track from Islands and the main instrumental melody from Starless.

When the album was released in May 1970 it was well-received in the press, giving rise to the classic Melody Maker headline “If Wagner were alive he’d work with King Crimson”. Thanks to an irresistible combination of anticipation sparked by the runaway success of the debut, along with an overwhelming curiosity to find out what Crimson would do next, Poseidon actually outsold Court in the UK album charts where it reached No.4. Poseidon was one of the Crimson albums Steven Wilson was especially looking forward to remixing for 5.1. 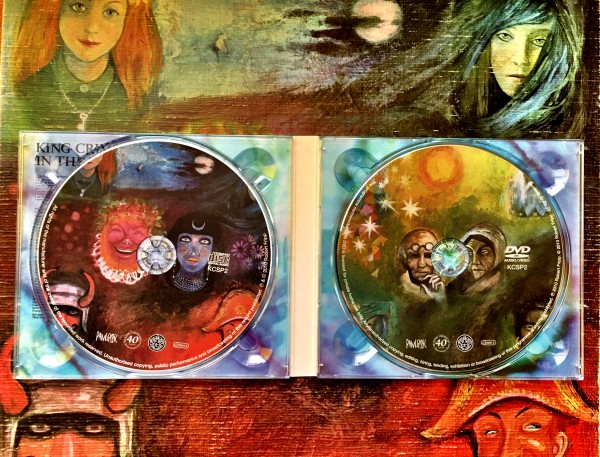 However, he was disappointed to discover that the multi-tracks for the Devil’s Triangle no longer existed. “Because it’s a bit of a soup, being able to go in and bring out some clarity and detail might have really helped it. As with so much other Crimson stuff, it has got a sense of ‘otherness’ that transcends so many of the other experimental pieces of the same era which haven’t dated well. Harmonically it’s very bizarre but it’s also a kind of prototype of the kind of thing they would try on Lizard in terms of its density and use of free-jazz piano. So there’s basically 12 minutes in the second half of the record where we’re having to rely upon the original stereo master. I think we have to count our blessings that we’ve been able to do what we’ve done so far because to go back and hope to find and work with tapes that are 40 years old is a tall order.”