HEAVEN AND EARTH
Posted by David Singleton on Jun 12, 2019 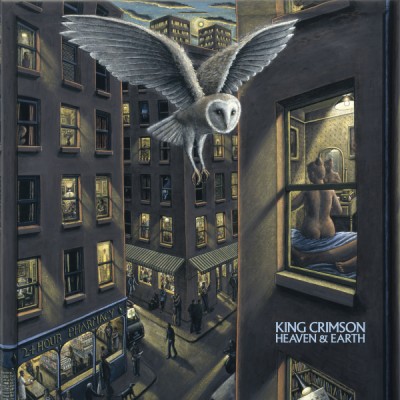 It has come to our attention that a small amount of the material that was added to the Blu-Ray and DVD-A discs on the Heaven and Earth Boxed Set is playing at a slightly incorrect speed.

An announcement of this kind, where it is a small error which would not otherwise be noticed by or even concern the vast majority of buyers is always difficult. But we aim for perfection, and those who spot such mistakes deserve answers.

The problem apparently centres on the bonus CD material that was added to the ProjeKct BluRays, such as Space Groove and The Projekcts box, plus a few of the live shows. It all plays perfectly, but very slightly fast, as on a turntable which is not perfectly calibrated.

All the material in question only existed at CD resolution (44.1 khz/16 bit). The Blu-Rays were authored by Opus Productions not DGM and we understand that this material was inadvertently added to the Blu-Ray at the existing 44.1 khz resolution - whereas Blu-Rays will only play material at 48 khz, causing the slight change of speed. Ironically, we generally disapprove of the habit of “upsampling”, which may indirectly have contributed to this issue.

Despite the keen work of many testers, and our own dedication to curating the catalogue to the highest standards, small faults are sadly inevitable in undertakings of this size. This particular error, where a very small proportion of the music is slightly faster than the original, would not concern the majority of music lovers. Hence evidently the reason that none of our testers spotted it. It was, I believe, first spotted by a fan doing a computer comparision, not by the human ear.

We strive for perfection, while accepting that it is unachievable. We berate ourselves and find such faults totally unacceptable, while knowing that if we do not “accept” that some will always occur, then no boxed set could ever be made within a practical or affordable timescale. Some degree of error is inevitable in order to make the impossible possible. Which does not make us any less livid that this has occurred.

It is both a blessing and a curse to work in an industry where fans expect “faults” to be corrected (even where this makes the project that they support financially infeasible). No book publisher would send you a free eBook because there was a typo in your hardcopy (as there always will be). Nor will a film-maker send you a new edit of a movie because there was a continuity or other error (as there often will be).

But it is good to hold ourselves to higher standards.

The nature of these errors is such that they will fortunately not affect the enjoyment of most fans. This boxed set remains an astonishing achievement by all those involved, which has already made many fans re-appraise this entire period of King Crimson. But a small number rightly will be concerned. And any imperfection upsets us. We are still awaiting exact details of which material is involved. For those who want one, we will then arrange a free 48 khz download from the www.dgmlive site of all the affected material. (As explained, this 48 khz master will be the same in terms of quality as the 44.1 kHz master which many fans already own.)

My thanks to davidfsnyder for sending this link to an interview with Jon Anderson where he talks about his experience working on KC’s Lizard and his very own, Prince Rupert..

MSNBC is running a Billboard interview with Bill Rieflin. The article discusses the upcoming Slow Music tour as well as the possibility of future touring and a future CD release.From the article: “We’re taking it one step at a time,” Rieflin said.

This Just In From Seattle...

Robert’s updated diary reveal him to be in Seattle ahead of gigs with Slow Music. He’s also included notes for the exhibition with PJ Crook, Paradise.

On Robert Fripp's updated diary: Much laughing and many tears here at FripCox House today. If...

To be truthful, Bill was the greatest human being I have ever known, equal only to my Husband....