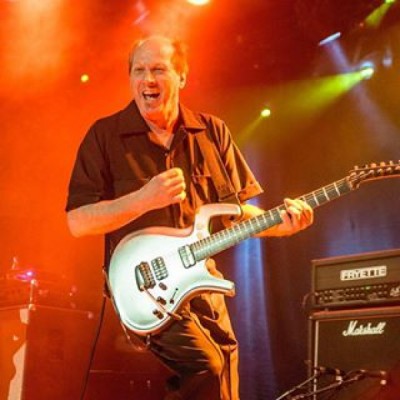 Adrian Belew’s recent publically-stated unhappiness regarding King Crimson playing songs from his era appears to have been resolved following a conversation between David Singleton and Martha Belew earlier this week.

Very happy to report that i have just spoken to Brother Belew and addressed various issues beginning with B and D. Ade and me have pledged to continue a convention of pumping down monster margaritas, both in Mount Juliet and here in Bredonborough, where Slinky Toes Willcox makes a mean margarita herself. Adrian has also agreed to be King Crimson's Ninth Man. Who knows what the future holds for this strange outfit?

And an hour later added...

Have just toasted Brother Ade at a distance with a Slinky Toes' Monster Margarita. There are no current plans for Adrian to come out with the current formation; but in Crimson's strange history there is a tendency for things to come around. So, Adrian has rejoined the larger family - hooray! - and doors to the future are open. So, no plans, but who knows what the future holds?
Right now, I'm looking forward to Gizmodrome and getting a few more guitar lessons...

oh happy day! robert and I just spoke on the phone for quite a while.
all is well between us and I am very relieved and happy.

And following a flurry of speculation regarding what was meant by the Ninth Man status, Adrian added...

HOLD IT EVERYONE. perhaps I can explain the concept of Ninth Man Inactive. it doesn't mean I'm back in the band currently. it means I may be back in the band in the future at some point. it leaves the door open for Crimson to evolve as necessary.

so, nothing for the future has changed with either Crimson or Gizmodrome but at least we now understand each and can continue our friendship.