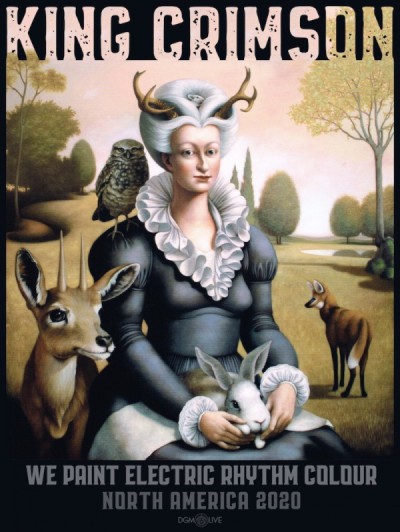 As previously announced, King Crimson will be touring the US in 2021, with the intention of playing the same cities that were cancelled or postponed this year.

In most cases, this will mean that those who have tickets for shows this year will be able to use those tickets for the rescheduled concerts next year. In some cases, however, we have been forced to change the local promoter - the company who promotes the show and sells the tickets on our behalf. This can cause some confusion. Even though we may be playing the same venue, in the same city, the old promoter (who has sold the existing tickets) will announce that the show is "cancelled" and will refund the tickets. This is sadly inevitable. A little like returning a tin of baked beans to one store, only to buy them again from a different store.

The good news is that just because a show is announced as "cancelled" and your ticket is refunded, this does not necessarily mean that King Crimson will not be visiting you next year.  Fear not! As soon as we have the completed rescheduled dates, we will publish them.

In the meantime, we have contacted all those who bought Royal Packages directly from us. There is no such problem with those tickets - and the promised goodies which come with retained Royal Packages, such as Tourboxes, are currently under manufacture.

On RF's Facebook, his first session in E tuning since 1985, rocking out and getting a very strong response...

DGM/Panegyric are a small team preparing a boxed set with over 750 tracks, and regrettably accept...