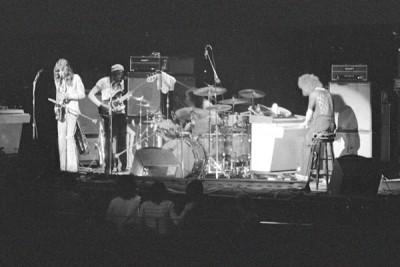 The British invasion of America that had begun in the early 1960s with pop groups such as The Beatles, provided a vital bridgehead through which the next generation would pour. Premier bands of the day such as Cream, Led Zeppelin, and others would spend the tail-end of the decade playing to increasingly bigger audiences, as rock music grew up and spread out beyond its cultish underground status.

For any record company and management anxious to secure a return on their investments, getting a share of the American market was always the main prize. Outside of the high-  maintenance and occasionally high-risk grift of payola and its ilk, getting your band hitched up to a support slot, no matter how low on the bill it may be, was still the best bet of getting the word out and maybe striking it lucky.

For King Crimson, the rationale that lay behind this “paying the dues” mindset had been          circumvented to some extent by the impressive sales figures notched up on both sides of the Atlantic by their debut album. Supporting The Chambers Brothers, Joe Cocker, The Rolling Stones, et al was all about consolidating and strengthening the depth of their impact. Had the group not fallen apart at the end of the tour, it’s not too much of a leap to suppose that the rollercoaster touring model in North America would have continued throughout 1970 and beyond.

Of course that’s not how things worked out.

It wasn’t until nearly two years later in 1971 that the band returned to the USA. Having lost the momentum that a speculative tour during 1970 might have gained them, Crimson were once again forced to ‘pay their dues’ supporting bands such as Procol Harum and Yes.

The paths of Yes and Crimson had intermittently crossed since 1969, when after seeing early KC gigs in London venues, singer Jon Anderson and the rest of his band mates had been galvanised into raising their own game. Anderson had guested on Lizard and Yes in turn had sounded Fripp out about joining their ranks during 1970 as the prospect of a working Crimson band appeared to recede.

However, by early 1972 Yes’ star had dramatically risen in America thanks to lengthy tours and especially the heavy rotation on US radio of ‘Roundabout’ from the album, Fragile.  As the Yes bandwagon rolled into Boston on the last date of an extensive tour, it was King Crimson who opened up for them, something they’d previously done in 1971 in New York.

On that occasion, it was newly-formed Crimson supporting. This time around, Fripp was dealing with their disintegration. Having actually split up on the first day of rehearsals in England in January 1972, the group were then persuaded to honour the tour dates on the basis of EG Management’s ‘contractual obligation’ argument.

A truce of sorts had developed between Fripp and the rest of the band as they criss-crossed America.  That said, the differences were evident when speaking to Boston based music writer, JP Donlon.  “There are two schools of thought” mused Ian Wallace. “One is committed to technique, discipline and virtuosity for its own sake. The other believes that the feeling of a piece, the feeling we give it, is more important. Basically the difference is between Fripp and the rest of us.”

The gulf between the two camps was not one which could be repaired at this stage. Speaking to Donlon, Fripp acknowledged that the band was effectively finished which meant he “would have to start all over” in figuring out how to proceed further.

When Yes followed Crimson onto the stage in Boston on the 27th March, Jon Anderson announced “That was a really fine set by King Crimson wasn’t it? They are a truly great band” he wasn’t wrong. Yes drummer Bill Bruford had arrived at the same conclusion after seeing them in 1969.  Having made no secret of his admiration of Crimson, and musical possibilities it represented, he’d resolved to join forces with Fripp no matter what the cost.

It was at this gig in Boston that Bruford seized his opportunity asking Fripp about meeting up once they were back in the UK.

Straight after the gig, Yes returned triumphantly to England to begin the recording of Close To The Edge. For Bruford, the process was a painful one tempered only perhaps by a sense of growing anticipation about his imminent departure.

Two months later, in May 1972, Fripp and Bruford kept the meeting they'd promised each other to see what, if anything, might happen.

Taken from the sleevenotes to KCCC40 – Live in Boston