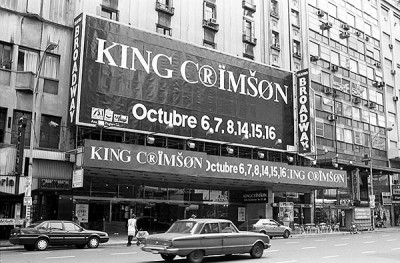 Given that they had last played in front of an audience in 1984 at Le Spectrum in Montreal, the reformation of King Crimson was of course a significant and special event. As Tony Levin famously quipped to Robert Fripp back in 1991, “I figure a three year break is fine, but seven years a bit TOO long”. In the event Levin and the rest of his colleagues would have to wait a little longer than that for everything to fall into place.

As Fripp wrote “I took the personal decision to put King Crimson back into action during the second half of 1990 but without a clear idea of how that might be. The picture of a Double Trio formation appeared in a flash while I was driving past our village church towards Salisbury one afternoon in the Autumn of 1992. The double trio was not what I intended, expected, nor wanted but I trusted this point of seeing sufficiently to act upon it.”

It wasn’t until 1994 that the path for Crimson’s return was properly cleared. Having recorded the mini-album, VROOOM during April and May that year, there followed a further two weeks of rehearsals during July and August. Finally on September 22nd, the newly configured Crimson arrived in Argentina to prepare for a series of shows that would lift the curtain on the next chapter in the band’s long history.

As the six members rehearsed at Estudios El Pie in Belgrano, Hernan Nunez, a member of Los Gauchos Alemanes, and South American supremo for Possible Productions, took on the task of preparing so that Crimson’s return was as smooth as it possibly could be. In other countries it might have been easy to book a venue and advertise the concerts. Yet, as Nunez explains, in Argentina things are rarely that straight forward.

“This old El Broadway had been closed and was in bad shape, totally abandoned except for Ricardo, a man who acted as ‘housekeeper’ and lived in the basement, with his cats and dogs. He was known as ‘the phantom of the opera’. Possible Productions Argentina took on to bring up El Broadway to good condition in order to have KC perform there and cut a direct deal with the owners. We had two huge power generator trucks outside by the door because the electricity situation was feeble and couldn’t handle more than 3000w. Meanwhile, the dressing rooms, backstage and stage were painted and several major repairs began taking place.”

Having erected a large marquee outside the theatre to advertise the forthcoming Crimson shows, Hernan’s people also kept a wary eye on ticket touts and other ‘arrangements’ that were common practice. “One afternoon Ricardo, ‘El Fantasma’ having been properly ‘oiled’ (paid) was very co-operative and he called us to tell us that our marquee was being removed and that a box office had been opened in front of ours in the entrance hall for another group”.

Getting across town to the venue in ten minutes on a fast motorbike, Nunez was surprised to see that there were indeed two people in the process of taking down King Crimson’s marquee in favour of one advertising forthcoming concerts at the theatre by Yes who were then promoting Talk. “A team was preparing to sell tickets with a big Yes poster, a few days prior to King Crimson. This was done by a big promoter. We ‘oiled’ the two guys and they left, after re-fixing the KC marquee. Later that day, the ‘Yes in Argentina’ story hit the media, using an exact copy of Crimson’s press release, even including the phrase ‘the return of Yes to active service’”.

Nunez recalls that Fripp and other members of the Possible Productions team saw the concerts by Yes, which Nunez reveals helped the Crimson shows. “We got the venue back in better shape than when we first arrived. We had saved lots of money and sold many KC tickets to the Yes   audience. The Broadway had been tested by the PA-Stage Monitoring Team (El Toro Martinez) in a full performance situation, which very useful to us, We had the lights tested and they just left the PA, power amps, cables, in there which meant we were able to use them.”

Fripp cites King Crimson’s formal return as being October 1st at the Prix d’Ami Disco. “The dress rehearsal the evening before was a poorly kept secret: I suggested to the promoter that he invite friends to come and listen.”

Hernan recalls “At the time the Prix d’Ami was a hot club-disco and was converted into a Live Rehearsal-warm up club for KC, the first show was a dress rehearsal, open only to invited guests, particularly the press, who attended in full formation, including journalists from other South American countries. Then two more performances, also for invited guests - personalities, many rock stars, actors, politicians and of course also journalists, but these two performances were also open to the public.”

The shows at the Prix d’Ami caused quite a stir, remembers Nunez. “The tickets were gone in two hours, lots of people outside, police and security team in red alert mode. There are of course many other juicy details to this whole story of King Crimson in Argentina, but this gives you a feel of what was going on and why I began to smoke again after 7 years...”

Looking at these two shows nearly 17 years on, they provide us with a visual record account of King Crimson which is about as close to their reformation as it’s possible to get. We see them looking fresh and excited, enthused and engaged, ready and raring to go. Though other concert videos may be of a more ‘professional’ level, they don’t quite capture the real degree of excitement of a band stepping out on stage after an absence of ten years and three months in the same way that Live in Argentina does.

Taken from the sleevenotes to KCCC47 Argentina 1994