IAN WALLACE TALKING TO HIMSELF ABOUT THE BOOTLEG OF BRIGHTON 1971
Posted by Iona Singleton on Nov 11, 2016 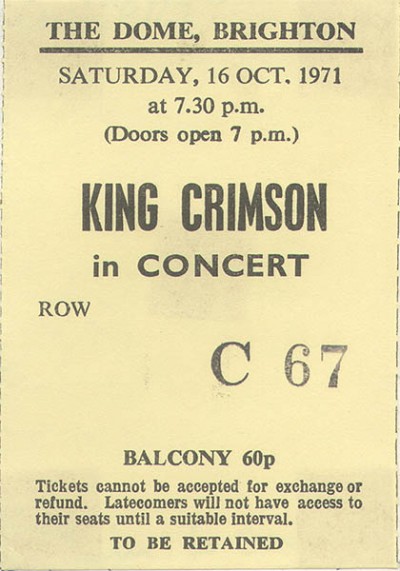 Well it’s a bootleg isn’t it? Not only that, but being a bootleg from 1971 it sounds like shit.

Well shit does have a certain hum. But you know what I mean.

I mean, far from being the sophisticated techniques bootleggers have today, this was probably recorded by someone’s girlfriend on two cocoa tins and a piece of string underneath a pillow meant to deceive the security waitresses as being someone up the chute.

So why would anyone want this?

No, the CD stupid!

No, not really. But I have it on good authority that it is the most sought-after bootleg pertaining to the Islands-era King Crimson.

And pray tell, why would that be? I mean, there’s three hundred million, nine hundred thousand, six hundred and seventy-two and three thirds collector’s CDs of this incarnation already out and they all sound better than this one.

Aha, well you see, it has the only known live version of “Islands” on it. That’s what makes it so collectible.

I see. So I suppose that if you’re a collector, collecting collectible collections, then it’s a must have.

So apart from the bad sound, and the fact that its got Islands on it, what else can you say about it?

Well, the playings pretty good. In fact it sounds like they’ve been on the road for a while and there’s a lot of musical communication and second-guessing going on. Not only that, but they sound like they’re having fun.

Especially RF. For example, it starts off with this sound of waves lapping on the shore

I thought Brighton was Synth-on-Sea.

There’s some banter going on between Fripp and the audience pertaining to Ian, but thanks to the crashing of white-noise waves I cant make out what’s being said. But whatever it was, the audience were having a right old laugh. And later on during some of the solo sections you can hear the band laughing out loud at what seems to be discovering some new musical twists. It all seems rather jolly.

Makes you wonder what went wrong.

Lets not go through that again.

This is obviously a band at its peak, enjoying one anothers playing and it shows. Mel, Robert and Ian are stretching out whilst Boz is anchoring the whole thing, steady and ultimately reliable, enabling the others to take it out as far as Pluto and back without ever getting lost. A musical lighthouse if you will saving the others from an impending train wreck.

No, this is a floating train, the Duchess of Titanic leaving Kings Cross at 9:45am due in at Southampton Docks calling at Clapham Junction,

Lake Windermere and the Chiswick By-Pass.

That was the thing about Boz that so many people didnt get. Apart from being lyrical, his playing was solid and reliable. Something that is so necessary in playing this kind of music where anything can happen at any given time. I guess many of the listeners of these performances didnt get that. But the players sure did.

Well, there’s the obligatory drum solo. Though I have to say that it gets pretty intense and the VCS3 bit is as good as Ive heard it. It really clicked that night. Plus Ian was still taking the piss by falling off the kit and then climbing on top of various objects and throwing sticks at the toms, making them go WOOOOOOO and BEOIIIING and DWAAAANG.

I often wondered what VCS3 stood for.

You know, it’s a pity that the sound wasn’t better. The playing is so on, that I’d really like to have heard it recorded with today’s state-of-the-art bootlegging technology. We’ve definitely come a long way since the days of the early seventies. But if technology continues to advance, then who’s to say that everything that was ever played live can’t be recalled. After all, it’s all sound waves that travel forever. Who’s to say someone can’t invent a machine that can find those waves and capture them on to disc?

You mean we could hear Beethoven and Bach and Gershwin and Miles concerts and Coltrane concerts and the Piltdown Men?

Taken from the sleeve notes to KCCC30 – Live in Brighton

And reels of dreams unrolled...

Best wishes to the Guv'nor

Rising at 09.30 and into the day. Notes To Self  written yesterday at breakfast in Hotel Acceptable, Washington, where a flying-bastardy-thing bit me on the back of the neck three times. Music Is A Liminality Between The Impossible And The Possible... on RF's diary, updated today.