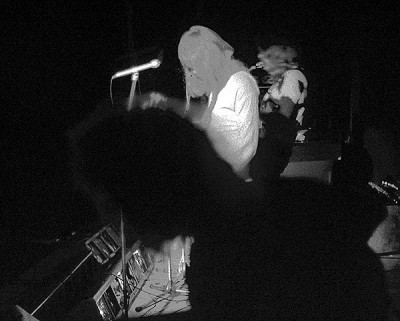 Robert, Peter and intrepid road crew aside, it was our bands' first trip to North America. I was very excited. Like virtually every other Baby-Boomer schoolboy, I'd grown up with Cowboys and Indians and Rock and Roll. Football and beer aside, I was finally coming home. Anticipation was heightened on the Pan-American flight over by watching "The French Connection".

We landed in Canada and as a sort of orientation and de-briefing, played two shows in London and Toronto before driving south to Detroit. I didn't realize it at the time, but the show in Toronto was at Massey Hall where twenty years earlier the legendary concert with Charlie Parker, Dizzy Gillespie, Bud Powell, Charles Mingus and Max Roach took place. Good job really, 'cause if I'd known that then, I might have been arrested for trying to take a piece of the stage with me, and then you probably wouldn't be listening to this.

Our first two shows in the United States were there in Detroit at the East Town Theater. This recording is the second of those shows. Of all the live concert performances of this band that I've heard so far, I think this has by far the best sound. Also, it's a sonic representation of the band at the peak of its powers, before the rot set in and the music changed.

This is amply demonstrated by a tight and swinging "Pictures of a City", the long months of playing showing through, with good use of dynamics building into a "Coltrane-like" free jazz frenzy.

This is followed by "Formentera Lady" and "Sailor's Tale". What is it about the word "dance" when in singing it's pronounced "dah-nce"? It just doesn't sound right to me when Boz sings it that way. Boz is from the Norwich area where, like most people in England, they pronounce it as "dan-ce". Somewhere down the line somebody made him do it that way and it's not natural. This

isn't Gilbert and Sullivan fer Christ's sake! In modern music "dan-ce" scans better than "dah-nce". That's why I've never liked all those techno-pop British groups 'cause they sound like a bunch of stuck-up, eunuch, toffee-nosed newsreaders. There, I feel better now... Where was I? Oh yes, the ride cymbal cue for the transition into "Sailor's Tale" once again demonstrates the bands' tightness and telepathy. There, that's more like it. The piece ends with VCS3 surf sounds and three people clapping.

"Whut the hell is this, Martha?"

"Did he just sing dahnce?"

"Circus" is next. After playing this live we'd made it our own. I put on the studio version to listen to the difference. This flows better to me. It's more even and less fragmented. I love the way this feels. Lumbering elephants, juggling woodblocks, shuffling clowns. I once sat up all night in some bird's flat in Germany with Jimi Hendrix. We listened to Who 45s at 33rpm because Jimi said that they sounded funkier. He was right.

"Ladies of the Road". All those dirty schoolgirls in Sheffield are in their mid-forties now. Sigh...

"Groon". Nice interplay from everyone, followed by another drum solo. Sorry. Actually why should I feel guilty? I'm not sorry. After all, this is a representation of a live performance. Oops, tape change. I find it interesting as to how much I was influenced by Elvin Jones. Still am. Peter uses the VCS3 effects extremely well. Imagine how the audience must have felt never having heard anything like this before...

"Gee Martha, did you take the brown acid too?"

"21st. Century Schizoid Man". A shortened, non-solo-saxual, blistering performance. Great crowd-pleaser not least 'cause it's one they know...

"Devil's Triangle". World War Two comes to Detroit. The reason why Mellotrons were made. It's a good job the Allies won before Germany invented the VCS3 Synthesizer. Personally I would have mixed the bombs a little lower and brought up the mustard gas.

Backstage during the applause for an encore we plotted... Sick of having to listen to people shout out "Epitaph" and "In the Court..." we retaliated.

"So you want 'In the Court of the Crimson King' do you? Well take this, you bastards!"

What you hear next is a hilarious and unique version of a familiar song that could be titled, "In the Court of the B.B. King". Did they get it? I doubt it. My reference to being an "All American boy", was no doubt some related sarcastic allusion, but I can't remember what it was now. Still, we had fun. Hope you do too.

Taken from the sleeve notes to KCCC18 Live in Detroit