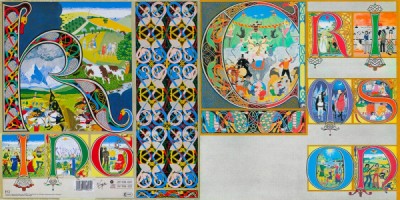 Described at the time by one critic as “The abyss where modern jazz and rock meet”,with its clashing styles, whirling improvisations, soaring classical-tinged themes and dramatic showcases, Lizard remains a remarkable album in the Crimson catalogue.  Given the ambitious ground it attempted to cover it is perhaps no surprise that it still has the capacity to polarise opinion amongst fans and band members alike.

Recorded in a state of flux following the implosion of the first band, and the release of In The Wake Of Poseidon earlier in the year, the King Crimson that entered Wessex Studios in the September of 1970 was still an uncertain proposition. New recruits Gordon Haskell and Andy McCulloch had learned a set of Fripp compositions in the band’s Fullham Palace Road basement rehearsal space. With parts allocated by Fripp rather than developed by the players themselves,  the regime involved long hours of the bassist and drummer playing on their, with little or no sense of what the final shape of the material would be.

Once in Wessex Studios, developing personal tensions between old and new members coupled with technical problems encountered at Wessex Studios, rendered this recording a somewhat fraught affair at times. “I remember the recording of Lizard was very hard” recalls McCulloch. “Bob Fripp had a lot of (the music) in his head as to what it was going to sound like, so you’d be working blind in the sense that we’d go and play the bass and drums with a very excited guitar track that wasn’t kept. I suppose it was a guide track. So you’d play around doing stuff, and then after you’d done your bit, then all the stuff would come out of Bob’s mind as to what he was going to put on top of it all.”

Lizard appears to represent a desire to forge a freer rock and jazz vocabulary, a commitment that could be measured by the increased involvement of Keith Tippett in Crimson recordings. Having made no secret of his admiration of Tippett’s music, Fripp formally asked the pianist, along with his wife, Julie Tippetts (nee Driscoll) to not only join the band on a permanent basis but become an equal partner in determining musical direction.

"The terms would have been that I would have had musical input. He knew that I was a strong musical personality and I would have gone in and possibly taken it all in another way with his blessing because we would have been joint bandleaders," recalls Tippett. Though tempted the pianist declined.  "I hadn’t long been in London and I’d left Bristol realising that I had to go to London to play with musicians who were more experienced than myself to learn quickly — apart from that I had too much love for the sextet and it would have taken me away from the jazz scene”.

Fripp harnessed two other members of Tippett’s sextet, cornet player, Mark Charig and trombonist Nick Evans, who recalls he and Charig spent two evenings in a booth at Wessex overdubbing on top of Haskell and McCulloch’s basic tracks.  “Our parts were added in small sections, maybe four or eight bars at a time and after each snippet was recorded it was checked carefully in the producer's box to make sure it was exactly what Bob Fripp wanted. It took quite a time to get all my sections down on tape,” says Evans. “During that period of my life I was working with jazz musicians who were very keen on accepting the first take of any recording.  You know, ‘capture the moment and maintain its spontaneity as much as possible’. This is NOT the way pop bands operate and I found the stop-start method of working a little unnerving."

The album featured another guest performance from Jon Anderson. The vocalist had been approached by Greg Lake who had relayed Fripp’s interest in having the singer record with Crimson. “I said OK and gave him my number and then about three months later Bob rang me up and said I’m going to record next month,” Anderson remembers. He had no idea what he was going to sing until he turned up at Wessex, and then couldn’t help but smile when he saw the title. “Prince Rupert was the name of a train that would go past our school every Wednesday and I thought it’s so bizarre that he wrote this song which I sang and it had that kind of connection.  Afterwards I told Bob that story, and you know Bob Fripp, he just said ‘Oh. Thank you, Jon. Bye.’” laughs Anderson.

The striking cover was executed by Gini Barris, who as Julie Felix’s housekeeper at the time, had a Crimson connection through the folk singer’s managers, David Enthoven and John Gaydon. Commissioned by Peter Sinfield, and with only a set of lyrics to work with, over the next three months, Barris seeded her beautiful illuminated lettering design with all kinds of commentaries and allusions upon the worlds suggested by the lyrics.

Sadly, by the time the album was released the line-up had already split-up following an altercation between Haskell and Fripp ahead of a prospective French tour. He was shortly followed by McCulloch. Not for the first time, Crimson had managed to snatch defeat of sorts from the jaws of victory.

Lizard represents a radically different re-imagining of what King Crimson could be with Fripp the composer finally emerging out from under the shadows cast by the 1969 incarnation. Melody Maker’s Richard Williams praised Crimson for grasping “the concept that rock can be built on scale to rival classical music”, while Sounds’ Steve Peacock declared “I am convinced that Lizard is by far the best thing to come from the fertile brain of Robert Fripp and Peter Sinfield so far...the music, the words, and of course, the excellent cover, make this something quite extraordinary...” The NME’s Nick Logan stated that “Lizard reflects Fripp’s progression towards a welding of rock and jazz, drawing from the most exciting regions of both.”

While the music excited passionate opinions both for and against over the intervening decades, it was not until Steven Wilson’s remix in 2009 that Fripp was finally reconciled with the album he had created in 1970.  “For the first time I have heard the Music in the music” he noted.

Steven Wilson has a high opinion of the record. “For me Lizard has always been an album that was too big for stereo to contain. I’ve always felt that if presented in the right way, I could make a case for this being the most experimental rock record ever made. It’s extraordinary what they’re doing on this album. In terms of fusing free-jazz with progressive rock for me there’s almost no parallel.”

Looking back, Andy McCulloch offers this overview. “Most bands have one or two songs in them and what we do is we regurgitate another form of that song. Whereas Bob was very often going off into stuff that was a completely new world, you know? It takes a lot of talent and courage to do that. People normally play safe...He’d go off and do anything that would push himself.”