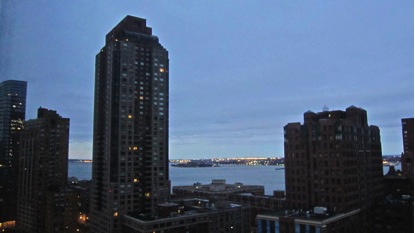 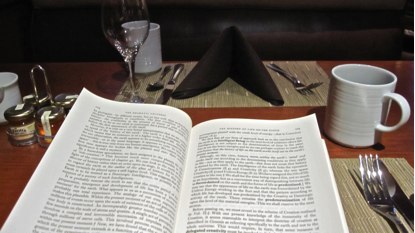 … in the hotel restaurant… 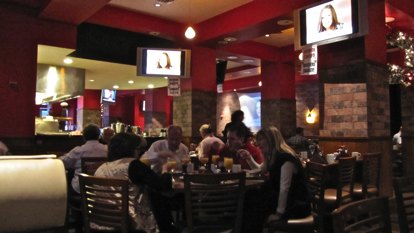 … until Sistery joined me… 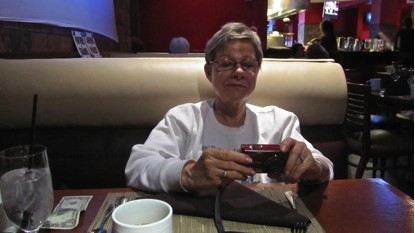 Returning to the room with continuing reflecting on performance, specifically during the past two days & generally.

A new stage is underway.

Something is available within the live act of music that is probably not possible in any other way; which is why we have live musical events, after all. All the energy that has put me to where I am confers a responsibility: this I acknowledge. But I don’t believe this responsibility can be honoured as a professional working player in any conventional manner. Professional undertakings are a sequence of happenings, one thing after another. The act of music is an event which is always the same, always different, always unique, always a multiplicity of events, eternal while taking place for the first time.

Entertainment, distraction, fun – all these are valid; and healing, reconciliation, redemption are available within popular culture, but increasingly hard for me to find. Walking onto a professional stage, I rarely feel I am addressing the necessary. These past four performances at the WFC, although within a professional context, were something else. For example, how many professional situations have Four Quarters Maintainers protecting the event & the performer, radiating goodwill into the space, neutralizing much of the danger of an open public arena. Many & various actions at the WFC were without courtesy & consideration, and it is little mitigation to defend them as not illegal. If so in that space, how much more so in rock venues?

A good question to ask, of any behaviour in any performance situation, is: does this action support the performance? If sitting in the front row with a professional camera + zoom & snapping away supports the musical undertaking, then snap away. If so, then what is the nature of this contribution? And what is the aim of the photographer? Does this support the photographer’s professional / personal interests? Is this a neutral act, with no effect? Is it a distraction to those audienting or playing? Does it matter? If so, who cares?

The WFC event, four performances in / as one, was remarkable, an opportunity to act otherwise. For some, locked into their pursuit of autography / photography / viddying, courtesy & even good manners ask too much already. Yet much (and there was a muchness of prejudicial / distracting activity) was neutralized. This / any event has hazard, danger & much possibility. In the world of the touring rock musician, the occurrence & intensity of distractions, demands & dangers are too great, without being neutralized, for me to function in that world.

The transition between the past-and-present stages has been underway for perhaps 2-3 years. I gave much consideration to what was required of me in the approach to this final long-period of my life. As of November 2007, major musical activity came to an end because of three primary music industry problems: the blocking action of Sanctuary UMG’s second-tier lawyer (for 18 months, until he was overridden by the superior claimed by Mr. STL as having confidence in him); Virgin EMI’s refusal to pay large outstanding royalties (eventually settled); BMG / UMG’s refusal to pay large outstanding royalties (eventually settled); and smaller problems, such as Island UMG copyright violations (settled by a significant donation to the Seattle Guitar Circle). Unless the primary person impacted gets personally involved, nothing happens. If UMG / Virgin / Power Players see the main character isn’t getting his hands dirty to deal with their obfuscation, evasion & malfeasance, they sit on theirs.

Despite these industry concerns, the KC Celebration took place in August 2008. After the final NYC performance, the Crims agreed to continue Celebrating on the West Coast the following May 2009. This broke down in October 2008 when Ade had conflicting dates. Had the West Coast Spring 2009 celebration gone ahead, perhaps the Celebratory Crimsonising would have set another trajectory in motion, and perhaps I would now be a continuing player in frontline professional rock. Instead, this provided another reminder of how much any member of a group is governed by the other members; and their interests, concerns, aims, aspirations, logistics and calendars.

Whenever KC is in active mode, my life is on hold. This is in the nature of raison d’etre. When the Crims walk onstage, the relationship is one of equals (with the English guitarist struggling to keep up with his equals). Until that point, 80% of what falls to the band falls to him. The KC Celebration was not something that could easily happen later, after the Crims’ various commitments had been satisfied. My life would have been on hold until – when? After 41 years of professional grouping, with my own plans a hostage to fate, arbitrary happenstance & calendars – in October 2008 the switch went from on to off, and I couldn’t switch it back. (There is a subtlety here, to do with the nature of decision-making, and noticing when / how / if a decision is made).

As long as I felt it necessary for KC music to enter the world, I was prepared to take on pretty much whatever nonsense came with it. Today, there are greater necessities for me than pulling new KC music from the air & touring the world to present it to ears that would rather hear an older repertoire (which is pretty fab, may we note). Live KC music of any period would have value, but I doubt it would shape the contemporary musical debate. A grief of expectations, conventionality, conflicting demands – a younger Fripp would have dealt with it, and suffered. An older Fripp chooses his suffering more carefully.

The Crim on-switch had moved to off & would not be reset. So, a transition: Theo & Fripp in churches & Coventry cathedral were following a trajectory already mapped with Soundscapes. The T&F Secular Tours were good professional work, planned in the earlier professional period, and superbly promoted by Gaucho Productions. But they did not enter the privileged space of sacred ground, nor match the air-raising terror of The Orchestra Of Crafty Guitarists.

One possible professional project, very attractive & exciting for me - ProjeKct Seven - moved out from Jakko, Fripp & Collins. I saw, in principle, how it could be arranged & made to work practically; this discussed, once again, with Don Nunez of Gaucho Productions. We made a possible-plan to bring P7 into the phenomenal world. But, I could not find the yes: this is decided! to make a formal presentation & invitation to the other players. The on-switch did not.

If one date were needed to mark a formal transition to this present stage, it would be 25th. March 2010 with Fripp at the age of 63 years.

So, last night was not the final show of a professional musician, but an event within a new stage already underway; one which is yet to be discovered & written while resonating & broadcasting away from the creative future. The Writing Project, the Guitar Circle, The OCG, ordering & recapitulating my life all have greater personal necessity than climbing into vans & sitting by boobies on aeroplanes, setting off to dodgy gigs (which might or might not hand over the cash) with various players who may share the same aims as myself, nearly all of whom play much better than I do & none have the degree of concern within the professional life that makes it problematic for me.

There is something else, too, and I am hearing a few gentle pre-echoes.

All of this is subject to the proviso: if a call comes in from World Central, everything changes.

The computer is closing… 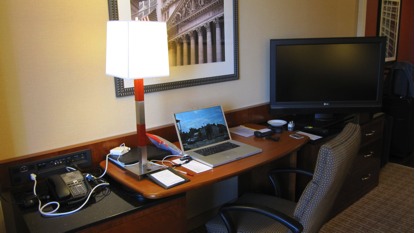 Bags by the door… 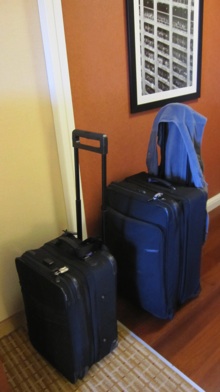 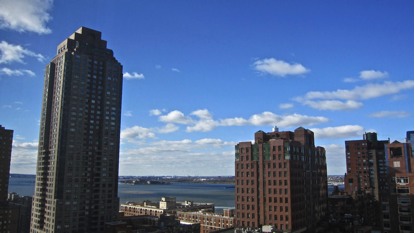 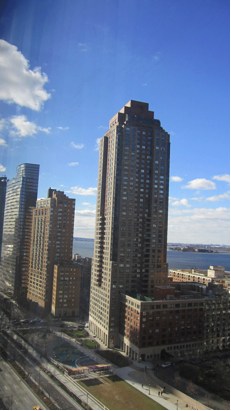 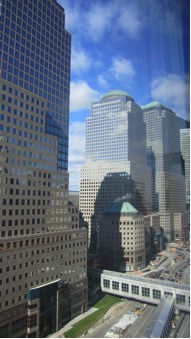 Lobby call with the Sistery Person for 13.00.

Into the taxi to the airport… 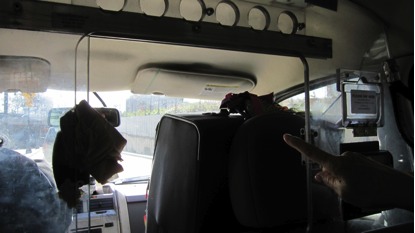 A charge of $50 for overweight baggage. Through security & into the Club for Fripp & Fripp dual computing I… 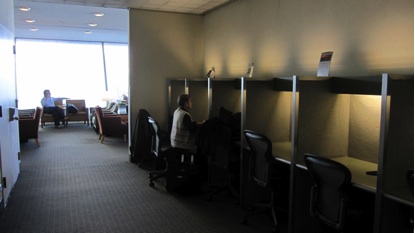 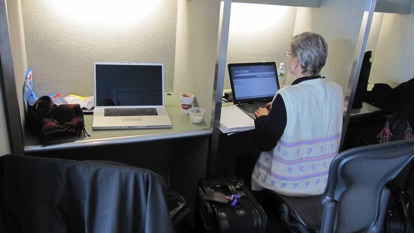 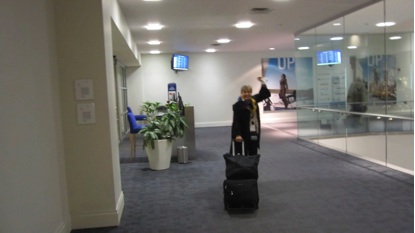 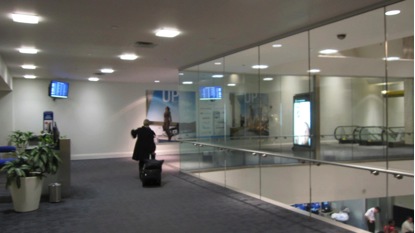 I miss my Sister already. Although we have been together in NYC for three days, the only actual time together-together was at breakfast this morning.

A common fallacy, held by many friends & families of touring players, is that when our pal / family member arrives in the city, this visit is a social event. So, let’s go play with them! I have lost friends & longtime acquaintances who, when arriving for their social event with their chum Robert, discover that the strange & eccentric & rude little man is surprisingly not available to meet them; nor even chat with other several/many old chums also in the same queue. But I am more important than them anyway! Surely he would make the effort for me? And this is only one city of n cities on one leg of the world tour.

Sistery Patricia herself makes no demand; rather, she is in support mode where useful / necessary, and able to independently organize & focus her time & functioning if not. Patricia is well aware that, when in performance mode, her brother keeps his attention close & holds the question: does this support the performance? Like: does meeting between 1-49 personal / professional people, undertaking interview/s + photo session/s, meeting fans for autographs & handshaking & personal pics, support the performance?

That part of my life is now at an end. The aim of acquiring the best liberal education available to one particular young man has been a success. It is an ongoing superb, wide-ranging, rich & deeply informative education of very-low lows & exceptional, privileged highs.

Suffering in life is inevitable. We have the right to choose our form of suffering; so, good to choose wisely. That young man at age 20 chose to suffer for an education appropriate to him. Today, I am grateful that he did so, noting & respectful of his instinctive intelligence. 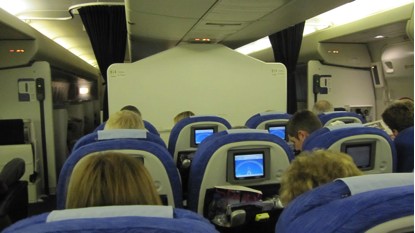