Bredonborough The Minx arrived back

The Minx arrived back late from Bristol, her first job on rising to handfeed WillyFred; who is very perky and playful, particularly when a dried prune is placed before him. But his teeth problems are chronic and, ultimately, without solution. 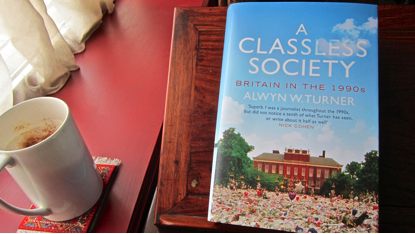 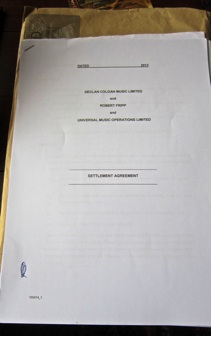 And here, brought together… 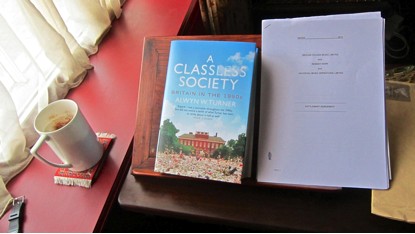 … a period of c. 23 years dealing directly with the repercussions of managerial abuse, betrayal of trust, lies, deceit, control and exploitation. Yes, it’s time to wave a flag for Dr. SG Alder, the Good Guy You Can Trust (according to Mr. Alder himself). My attention, for most of the 1990s, was on dealing with Endless Grief and its repercussions, which went way beyond professional concerns.

Managerial abuse is abuse. Economic abuse is abuse. Bullying, threatening, control and exploitation are forms of abuse. Today, there is a clear and widespread concern with abusive behaviour by those in positions of trust that, even twenty years ago, even ten years ago, even three years ago, was perhaps not given much more than lip service. When did this change? In this country, perhaps two particular factors swung public opinion: the hacking of Millie Dowler’s mobile phone (Daily Mirror) and the horrific Jimmy Savile story
(Sky News / Daily Mail).

Mr. Alder was very concerned to protect his reputation during the early years of the dispute (1991-93), even (in the Scrapbook to the Frame By Frame box set released on Virgin) seeking to delete the reference to EG defaulting on royalty payments (notwithstanding the default covered four royalty periods over two years). My clients are renowned for their probity and sound business practices: thus Steven Fisher acting for Messrs. Alder & Fenwick of EG. Were Mr. Alder dopey enough to pursue libel action, with years of scanning archive documents and receiving information from Deep Throats, he would have a hard job to substantiate a claim of renown for his probity and sound business practices.

The end of Mr. Alder’s career as an artist manager / music person may be dated from 1993/94 when Virgin and BMG Publishing dropped their contracts with EG, and no successful new artists had given their copyrights to Messrs. Alder and Fenwick (though this was actively sought by the partners, a strategy to rebuild the EG music empire); and Mr. Alder attention turned to legal action against Lloyds'. Today, Mr. Alder’s managerial reputation is beyond repair IMO, although T Rex, Bryan Ferry, Roxy Music, Toyah Willcox, and even King Crimson, are presented as having been promoted by Mr. Alder (opens pdf).

For most of the 1990s, in addition to dispute, dissension, I was touring and abroad - Sylvian-Fripp, The Double Trio, ProjeKcts, Guitar Craft – and moving house, which itself took seven months in 1999. So many of the currents of British life flew by and kept going. A Classless Society is an interesting and informative tour-guide and aide-memoire to the decade.

On this morning, here are the UMG Settlement papers about-to-be signed and sent… 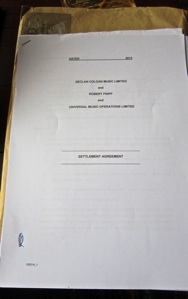 Mr. Most-Useless-Of-Smiths gave me problems at Virgin way before he gave us problems at UMG. Now, with Adam Barker at UMG, there has been an outbreak of intelligence noticeably absent in our dealings with UMG before Mr. Barker’s arrival in 2011.

From EG to Virgin to EMI to Sanctuary to Sanctuary UMG, over two decades of griefly repercussions stemming directly from a lie told by Mr. SG Alder on February 22nd. 1976 at Sherborne House, Gloucestershire; and then directly from Mr. Alder whistling artist-royalties into the money-stream of his own companies (1988-91) to prop up his collapsing financial affairs (through the troubles of Lloyd’s insurance market, the UK property collapse, and slowdown in the music industry) which necessitated EG selling copyrights, not all of which EG owned (grey areas was the term used in the publishing sale to BMG). Mr. Alder’s un-probe and unsound business practices passed to myself, and others, a series of problematic repercussions (including massive underpayment of both record and publishing royalties by Virgin EMI, BMG Publishing and UMG Publishing) that took years to settle; even before the copyright abuse by UMG (the dispute beginning in 2007). Readers of this Diary will be aware of some of the details, although the full story has not yet been written.

Mr. Alder was a man prepared to lie to further his own interests. The key point here, is that in the history of the time, in February 1976 one would not have expected a chartered accountant to lie for money. As a chartered accountant, Mr. Alder claimed professional status and the assumptions of proper conduct that accompanied that position; reinforced by his Good Works for which (in 1982 at least) he anticipated a knighthood but eventually received instead an honorary Doctorate in Music and Philanthropy. I wonder what institutions, and which persons in those institutions, would presently enjoy an uncritical confidence and trust, in respect of their honourable conduct in front of persons reliant upon them. 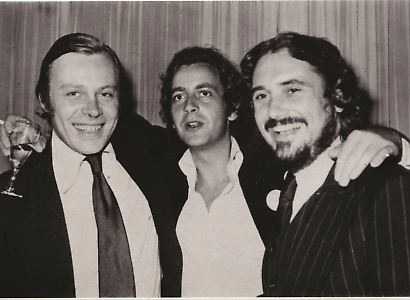 … with the late Willie Robertson (left) and the late Andrew Miller (centre).

11.45    Thomas Philpott and Plumber Jack are at work to fit Thomas’ radiator cover I… 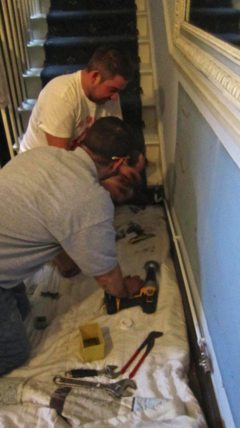 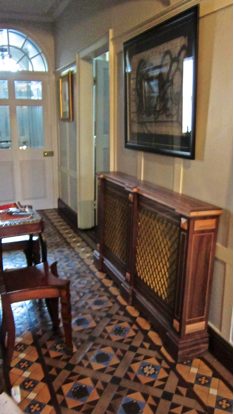 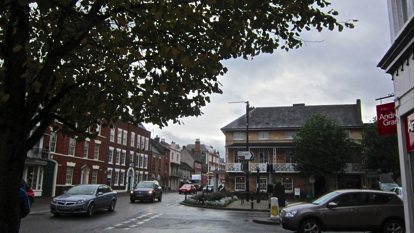 Preparing lunch for the Minx, who set off c. 15.00 to Southampton for her show tonight… 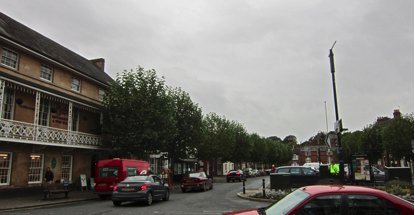 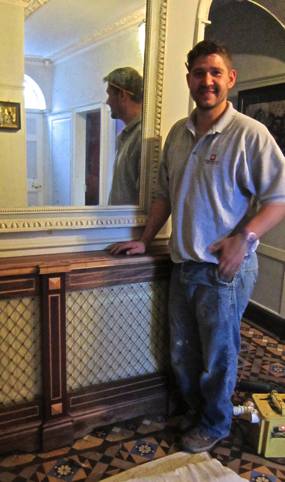 Supper, and the inbox has been gently attacked.

WillyFred has returned to perky mode, eating like a Piggleswade and demanding attention. This is a good sign.

An evening practising ahead. 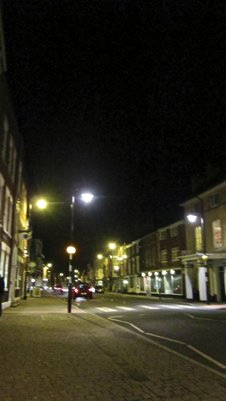