A nippy, bright Autumn morning. The Aga is restarted & beginning to warm.

Devil Bugs and Travelers :: Posted by professionalhumanbeing on November 02, 2010
I wonder, or perhaps hope that RF has discovered and is a happy user of the neti pot. Flush out anything that gets in there before it percolates into misery. Especially during travels, giggery, etc. with wishes for health...

Unfamiliar with the neti pot am I. I travel with gelsemium & arnica.

From Sydney :: Posted by thegrandcuckoo on November 03, 2010
My apologies in advance if this is question has been previously answered on this forum; Have King Crimson or Robert Fripp (solo) toured (or have considered touring) Australia? Or have such tours been considered financially unviable?

Hassell with Soundscapes? :: Posted by piikea on June 03, 2009 While checking out Sid Smith’s post about the Luminous Festival and seeing Jon Hassell was to be there, it occurred to me that Soundscapes might fit in quite well with Hassell’s sound.   I suppose there may not be common ground between the two musicians but an interesting combo seems to me!  Add in Capt. Eno and it gets even better......or, too many cooks in the kitchen??   Just an idea from the peasantry.

The exciting invitation to visit Australia was to be part of Eno’s three weeks at the Sydney Opera House. The story has been told here…

16.58    An exciting invitation to visit Australia, for a project that means a lot to me, has become enveloped in a surfeit of bureaucracy that would press on DGM to an unacceptable degree. It would also take up a huge amount of my time to simply read & deal with the terms of the contract, and this has had the effect of crushing my enthusiasm for the event.

Stuff, yes. Too much stuff, unlikely. Too much unnecessary stuff that diverts DGM’s creative energy & presses the joy in my heart flat: not.

DGM has a contract policy, the paper equivalent of the No Jerk policy: if a contract written in English takes longer than 15 minutes to read and/or is less than 95% intelligible, it is declined.

So, I invoked the Contract Terror Policy & have declined the appealing & interesting work, with deep regret. To the Australian promoter: this is way too complex. Let’s drop this immediately, please.

19.36    The wonderful project in Australia has returned. The promoter re-worked the contract to make it as brief as possible & the original 22-page contract went down to 7 pages. They are also prepared to deal with additional matters such as insurance, the recording - filming – photography clause, the sponsorship clause, freight-equipment & withholding tax. From my reply…

if we had begun at this point, i'd be coming to Australia and excited to do so.

but we didn't begin here. we arrived at this point after the On-switch had moved to Off. so, with deep regret, this moment has gone.

my very best wishes to you for the project. B… is one of the very few people whose work interests me as much now as it did 37 years ago

11.37    Australia returned again.  The promoter called David at DGM HQ from Australia, twice, offering to arrange a simple 2-page contract. If the 7-page contract, down from the 22-page contract, was as brief as possible, this suggests the new 2-page contract is an example of the Sixth Principle Of The Performance Event: the impossible is possible. From my reply to David…

i have given this further thought over the night, and although inclining back to positive, i find the moment has indeed passed.

what a pity! why not begin with simple & straightforward? i continue to be astonished at the stupidity of the industry.

apologies for your time wasted on this.

In a call to DGM HQ & a conversation with The Bookkeeper, they expressed disappointment that I will not now be receiving income following a long flight to the Southern Hemisphere. I agree, to the extent that it’s good to be paid for your work while noting that receiving payment is not an inevitable nor necessary outcome in my own field of professional endeavour (this also on the basis of experience). I attempted to convey the notion that, if you remove enthusiasm from the aspirant artist, work is only a professional activity. When this happens, the aspirant artist begins to die on the inside.

Number-crunchers don’t give a hoot for this line of thought, particularly for an accountant who has moved into “artist management”. Well-meaning number crunchers pay lip service to the notion, but don’t factor it into their computations. Well-meaning business-representatives, who are also fans & enthusiasts, even those wholly committed to a particular artist and/or venture, nevertheless tend to cook their Golden Goose. And later, wonder why the well-basted artist seems to be doing less than they used to in the way of promotion, interviews, in-stores with fan autography–photography, touring & recording. Surely the artist can’t have as rich, creative & satisfying a life outside the public domain? Don’t they want to be the centre of attention for uniformed commentary & consumer demands?

Reasonably & rationally arguing for a balanced life, holding the overview of qualitative & quantitative elements, has signally failed for me. I have only stopped doing shitty things when I have said no. Regrettably, often a yes has been possible, even a preferred option. But, you only stop doing shitty things when you stop doing them. How to express this positively? Perhaps: you do good things when you accept nothing less than good things. I prefer this form… 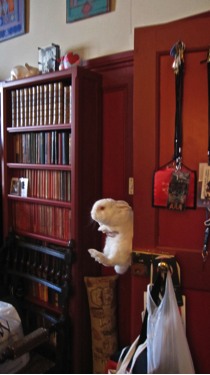 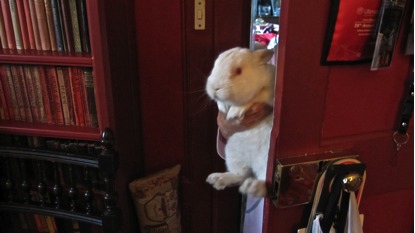 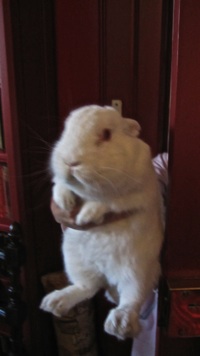 Mother-In-Law Barbara is visiting for lunch.

Catching up on lots of tired. 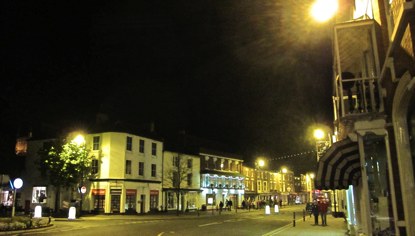