Waking with a stream of ideas for Fripp & Fripp flying by: rising, marking & recording them while they were hot & available. Then to a reading breakfast where T called, very excited about The Humans’ rough mixes.

15.52  A conference lunch with speech presentations. We are all wearing our laminates, declaring who we are & our favourite rock star. My favourite Rock Star is Toyah Willcox… 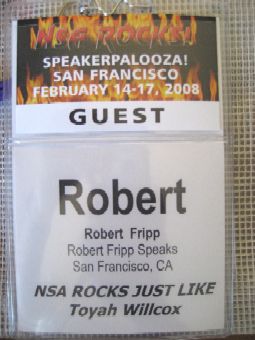 An after-lunch run-through run-through with Sister of our talk tomorrow. We are invited to participate in a Jewish service this early evening.

20.33  At the service I wore a yarmulke and was asked to say a few words on activities in an earlier incarnation, one in which I played Bar Mitzvahs. This was the story told…

In 1966-68, when I was 18-21, I paid my way through Bournemouth College, where I was studying economics, economic history, and political history with a special paper on social conditions 1850-1900, by playing at the Majestic Hotel in Bournemouth. The Majestic was a well-known Jewish hotel, run by Fay Schneider. The Majestic Dance Orchestra (a quintet) played 3 nights a week during the Winter & 4 nights in the Summer, accompanying visiting cabaret acts on Sundays. In addition to foxtrots, quicksteps, tangos, Jolsons fast & slow, from time to time we also played for weddings & Bar Mitzvahs. At one particular Bar Mitzvah, the Chief Rabbi addressed the congregation, and the directness of his advice & delivery continues resonating to this day. The Chief Rabbi spoke very little English, so he got to the point quickly. He rose & spoke:

“When you go into your shop, say Hello God! and you will have good business”.

“May we open ourselves to the Unconditioned world, that our wishing for what is real & true & moves from conscience, hope & faith, acceptance & love, moves into & permeates a world governed by fashion, advertising, taste, habit, inventions, prices of near substitutes, expectations of trends & changes in price, changes in the distribution of income & the quantity and quality of the money supply, that our professional lives might be mediated by the imperatives of necessity & sufficiency”.

But he didn’t say this: firstly, because his English wasn’t very good; and, secondly, because he wasn’t taking a course in economics at Bournemouth College.

What the Chief Rabbi did do was to convey a complex & difficult notion – the impossibility of an endless & benevolent Grace entering our ungrateful & uncaring world – in 15 words: 12 words of one syllable, 3 words of 2 syllables, and one word of three syllables but pronounced as if having two (business):

“When you go into your shop, say Hello God! and you will have good business”.

A longer story of the Majestic is that, a month or so before beginning there, I had left The League of Gentlemen as had also Reg Mathews (stage name Tony Matthews). Terry Squires replaced me on guitar & Tony Head (later of Tony & Tandy renown) replaced Reg. I had given up electric playing & intended to focus on classical guitar. But the guitarist at the Majestic had just left: Andy Summers, off to London with Zoot Money’s Big Roll Band (becoming Dantalion’s Chariot) and I was offered the hotel gig. For some reason, perhaps challenge, I accepted. Not long after, I stopped working in my Father’s estate agency in Wimborne, Welch & Lock , and went to Bournemouth College to take A levels. The plan was to seek admission to the College of Estate Management in South Kensington & return to Welch & Lock at the age of 24 with a BSc in Estate Management. I sat the economics & economic history exams after four terms, instead of the conventional six, got A & B grades, was accepted for university, arranged (awful) digs in Acton and left college early at the beginning of 1967 for a few open months before moving to Acton & London in the Autumn. This was when I began hearing Hendrix, Sergeant Pepper, the Bartok String Quartets & more – and my life moved in another direction via Cremation, an appalling power trio, and the Giles Brothers. The longer longer-story is longer.

A woman came up after the service: she knew the Majestic hotel, and had stayed there not long after my time there.

Then to snacking with Sister in the Concierge Club on the 11th. floor & rehearsing for Fripp & Fripp’s formal debut tomorrow.

Listening to The Humans’ demo mixes. 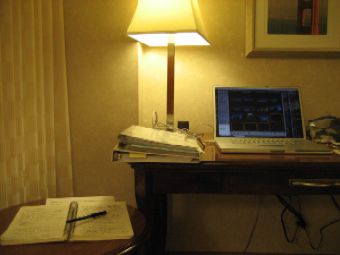