Your intrepid reporter is back at 30,000 feet, en route from San Francisco to San Diego, accompanying the eight musketeers : six shows under their belts – three in Seattle, one at the Saratoga winery, and two at the Fox Theater in Oakland. And four Royal Packages under my belt. Thus far we have had visitations from Jakko, Gavin, Bill and Mel, and a brief viewing in the wings from Robert.

The talk in the van on the way back from the venue last night was about “musical age”. Young bands naturally have the energy and innocence of youth, but Crimson (while their members are no longer in the first flush of youth) are also a musically young band – possibly because the act of creation is, by definition, a new young birth. A master musician plays music every time as if it were the first time.

The talk in the coach to the airport was more prosaic – given the interesting news that the Pink Floyd tribute band “Brit Floyd” can sell out the huge (and beautiful) venue at Red Rocks, people were quoting their favourite tribute band names : The all girl groups, Lez Zeppelin, AC-D-SHE, Vag Halen, the inspired Surely Bassey, No Way Sis, The Red Hot Chili Pipers, or my personal favourite (courtesy of Jeremy) All Simon and Part Garfunkel. 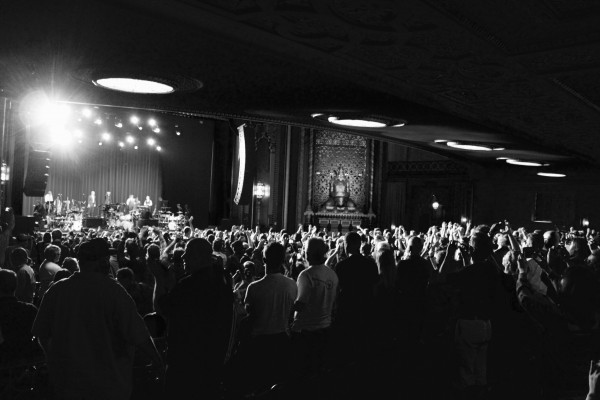