Toronto
So the tour is begun. The “Star sleeper bus” coming to drag us away from the comforts of the hotel arrived five hours late, so we arrived late to the venue (comparatively easy to deal with), the driver had however exceeded his allotted hours and so was unable to collect us after the show (a little harder to deal with), and the “Star bedroom”, Robert’s sanctuary for the next three weeks, is a black hole, fairly bashed around and with no windows (much more difficult to deal with).
Would I want to do this at 76? Hmmm… It has always felt like a necessary and logical step into the future, while for Robert, I suspect the practical reality with which we are currently presented must feel like a step into a well-forgotten and little loved past.
The show, however, went well. When we got to the Q&A, a large and constantly replenished queue began to snake down the aisle. It seemed that it might never end. But this is the chance to get answers. One question, from a musician who has problems finishing projects and wanted advice, could be the basis of entire talk in and of itself. In fact, in a slightly Monty Pythonesque way, I began the following night by answering that “question from the night before”.
After the show, a long taxi ride to find our ever elusive bus, trying to sleep, and on to Montreal. 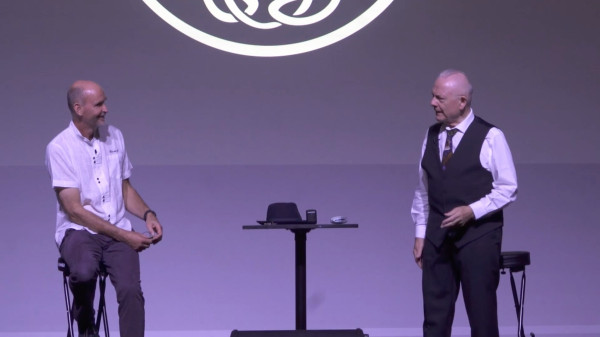