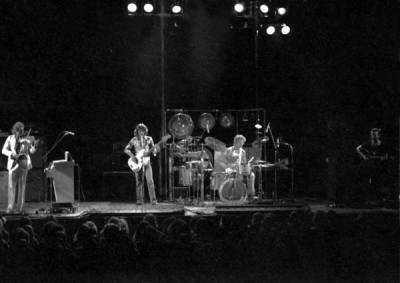 The forgotten show. The performances before and after were recorded on multi-track, while all that remains of this show is a cassette of the front of house mix - presumably the tape that RF refers to in his diary "Shout at PW after gig for coming in with the tape..."[endtease]The tape (thank you, Peter Walmsley) is an incomplete fragment of seven tracks - justified by Easy Money ("fuzz solo v. effective" - RF's diary). Hearing this, a different diarist 30 years later observes “fuzz solo v. satisfying.” Just when you think it’s all over there’s a delightful improv spilling out of Easy Money featuring David Cross. For a few moments they create from thin air a beautiful tender ballad with a touch of Trio. As with many board recordings, the mix can be interesting. The end of Fracture almost becomes a bass and bass drum solo - interesting for students of John Wetton's playing. 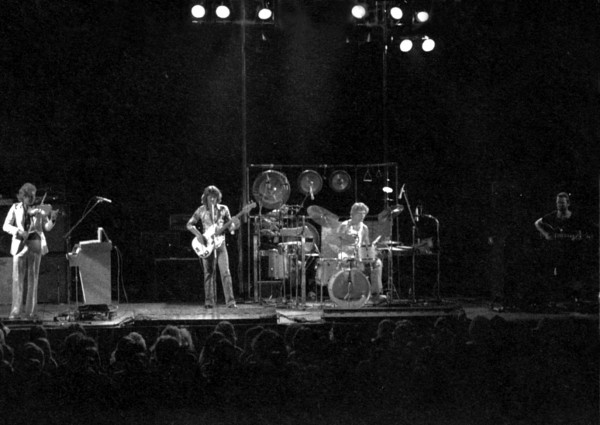 The forgotten show. The performances before and after were recorded on multi-track, while all that remains of this show is a cassette of the front of house mix - presumably the tape that RF refers to in his diary "Shout at PW after gig for coming in with the tape..."[endtease]The tape (thank you, Peter Walmsley) is an incomplete fragment of seven t... 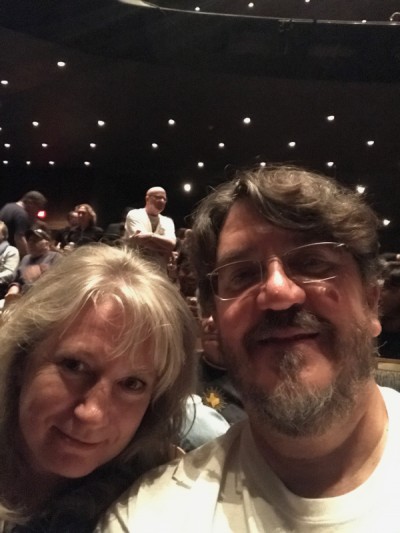 Written by Terry Rawlins
First chance to see Bruford
Growing up in southern Delaware it's amazing the music I was able to be exposed to. In August '72, I went to see Yes at the Spectrum in Philly only to see a straight haired blonde on drums... Back in the day of no internet, how was I to know Bill Bruford had left Yes 2 weeks earlier! I was devastated. Heart of the Sunrise with Jon playing a tambourine instead of Bruford's outrageous high hat. Of course, Chris Squire did not disappoint! Less than 2 years later, driving my '64 Buick with 3 friends in tow, we headed to the Kennedy Centre to see the mighty King Crimson with one of the greatest line ups ever. There we were in the lobby with several folks in Tuxedos waiting for the Classical Concert in the other hall. Quite genteel and very nice actually. Steeleye Span opened and were great. Between bands my mates ran off to the restroom while I sat and watched the roadies roll out the riser that had Bill's set on it. I was already blown away. Needless to say the show was absolutely fantastic. The band was in their muscular glory and the hall was outstanding for sound. Bruford was spot on and the performance was followed by several live shows over the years.

Written by Jure Humar
Flawless, Crims at full power
I name this show one of the most essential shows of the 1974 North American tour. It starts with a very cool Lament which is followed by one of the most interesting improvs the band has ever done. It does not do the band justice to say that they are on full display here. They are too good. Exiles and Easy Money deliver as always, with some of the strongest violin ever by Mr. Cross, who, as always does his utmost to be on par with the Bruford/Wetton/Fripp trio. The following improv is very short and not particularly special, but I guess it was just a warm-up for a very strong Fracture which fires on all cylinders. And as if all this wasn't enough, we get to hear what is arguably the greatest Starless the band has ever performed. Wetton's singing is top notch, all while delivering a truly incredible bass playing, Fripp shreds his guitar as only Fripp can, Cross plays with particular passion, but the crown goes to Mr. Bruford, who probably had a revelation that day. His playing on this Starless is so innovative, so powerful and so passionate, that one wonders why is there so little talk about Bill Bruford and so much fuss about other drumming giants who simply do not overshadow him. Bill Bruford is one of the top 5 known drummers as far as I'm concerned. This concert, amongst MANY others, proves it. He is one of the many reasons I love King Crimson so much and why I simply cannot get enough of hearing them. Highly recommended!

Written by Art Campo
Where's the rest of the
boards from this last tour? This band was INTENSE for it’s last go round. This DL’s short but sweet. A great version of Fracture but the Improvs should have been left uncut as the intro to Exiles and the outro to Easy Money, IMHO. Great sound overall w/ a big presence from Wetton and BB as I remember from the final performace at Central Park.&nbsp; Should’ve been a little cheaper, other DLs are twice the length. Any chance of getting any of the 73-74 NYC shows out?

Written by Gary Williams
Cruel Twisted Smile
A bitter sweet show for me---and anything but the “forgotten” show.&nbsp; As a near penniless 19 year old college student living in central Virginia in 1974, Washington DC represented the closest venue for me to experience a real rock show, but still almost 200 miles away.&nbsp; Without a car or any local friends into Crimso, and no money for a bus ride and an overnight stay in DC I wasn’t able to make the 200 mile trek for the July 27 Crimson show.&nbsp; I consoled myself in the knowledge that I would catch KC the next time around; perhaps a tour in 1975 was already in the works.&nbsp; But alas, the boys called it a day (and a band) later that summer in ‘74.&nbsp; I was crushed.&nbsp; The ‘73-74 KC lineup touched a cord in me at that time, a cord that still burns with enthusiasm to this day when I see a download available from DGM. &nbsp;Around 1980 I met someone who attended the KC show in DC in 1974.&nbsp; He claims it was a life altering experience, and apparently a venue altering experience as well---soon after the KC show, the Kennedy Center banned rock acts.&nbsp; A listen to this new download offers some clues. Wetton and Bruford are very forward in the mix, and Wetton’s thunderous bass lines dominate throughout---the building foundation must have nearly buckled from the sonic weight.&nbsp; Lament opens predictably enough, but in Improv I, a quiet percussive opening by Bruford is punctuated by ominous bass from Wetton.&nbsp; Cross chimes in with staccato electric piano and Fripp is frankly nowhere to be found. Exiles follows, the lilting violin and mellotron give this song an almost medieval feel (shared by another tune from the period, The Night Watch, notably missing from this show). &nbsp;The instrumental break in Easy Money offers Fripp a chance to stretch out with his patented sustained Les Paul fuzz, the best I’ve heard this side of the Asbury Park gig. Bruford and Wetton keep the tune moving along with driving bass and drums.&nbsp; Cross plays a sweet mellotron, the break builds nicely to Wetton’s vocal return with the last verse. &nbsp;Improv II moves slowly, opening with some Fripp sustain leading to some elegiac violin from Cross.&nbsp; Brief, polite audience approval provides no hint of what’s to follow---a monster version of Fracture.&nbsp; As the DGM download blurb mentions, the bass and drums dominate here.&nbsp; The truth is, Wetton alone drives this tune with a vociferous rumble and roar.&nbsp; The Mahavishnu Orchestra-like interplay between guitar and violin in the closing section gives way to more Wetton bass and a mellotron close from Cross. &nbsp;This all too brief sonic tease from 1974 ends with Wetton singing Starless with a smoky prettiness.&nbsp; The ending instrumental break is confident and muscular. The crowd applauds, the tape ends abruptly. &nbsp;Cruel twisted smile indeed.